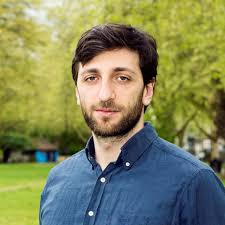 Macedonian comic Vlad Illich has won first prize (worth £500) in the Get-Up, Stand-Up New Act Of The Year competition, run by The Stand-Up Club. In a closely contested and high-quality final last Saturday (28 December), Vlad beat off stuff competition from the other 8 finalists, who went through heats and semi-finals with over 300 acts applying to take part. As well as a cash prize, Vlad will receive paid spots at our weekend pro clubs in 2020.

Judges were Amir Khoshsokhan (BBC Comedy Award Nominee), Paul Revill (professional comedian and the MC on the night), and Sharon Jackson (Much Laughter). The audience also had their say as their votes on the night counted for 50% of the final score.

Details of Get-Up, Stand-Up 2020 will be announced shortly…