Scott is a brilliant headline act. At the end of 2020 Scott was voted “Best Act” in the “Comics Comic” awards, a prestigious award voted for exclusively by professional comedians – a bit like Players’ Player Of The Season in football. With his sharp writing and top notch delivery, he is touted as the next ‘arena’ comic to break through. His Northern wit and fantastic comic delivery has meant he is probably the most in-demand circuit headliner this year.

Scott has appeared on BBC Radio 4’s The News Quiz, The Now Show, The Likely Dads and Elephant in the Room with Sarah Millican, The Summer Festival with Daliso Chaponda, The Comedy Club with Arthur Smith, and Knock Knock with Helen Lederer. He also featured on the BBC One show, Live from The Edinburgh Fringe.

During the lockdown of 2020, Scott pioneered the viral hit, Stand up from the Shed, a weekly topical live streamed stand up show from his actual garden shed. The show achieved national coverage in the press, Sky News, BBC News and Five Live and has had over 150,000 views. 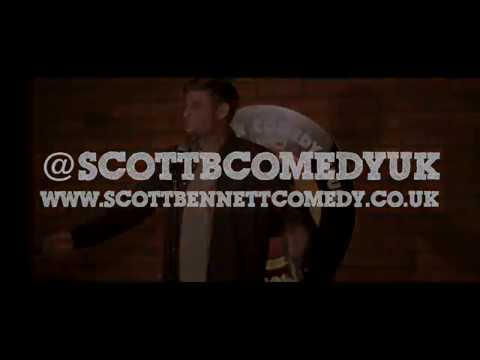